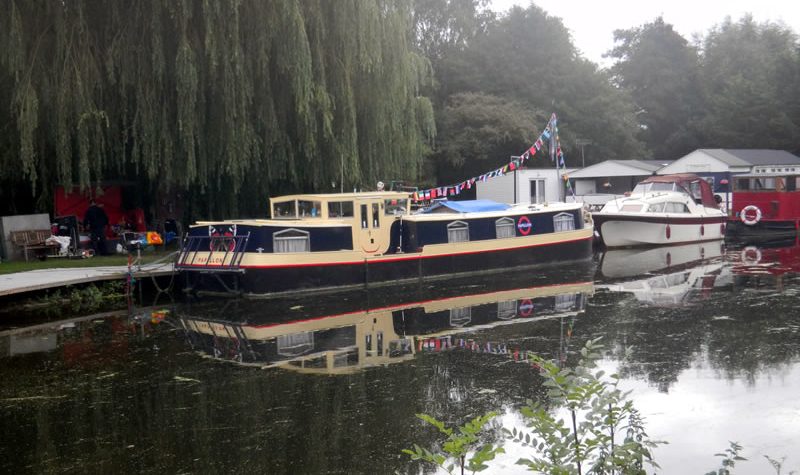 Day 5 of my Lea Valley Walk
Thursday September 12th
To-day we started from Broxbourne and our day began with a meeting with Jeremy from Broxbourne Food Bank. We enjoyed a chat and exchanged news about our respective food banks- and then I was off with Kiwi- just the two of us and the longest days walk of them all. So here is a photo of us both at Millstream Bridge which also shows how delightful the River Lea is at Broxbourne - and we set off on our long walk which began with the River Lea at her most picturesque.

Then I missed a meeting with John because Kiwi and I were walking so impressively fast.

But at Enfield Lock we stopped at a thoughtfully placed table and chair – I thought Kiwi would enjoy a drink of cool water - but a shy young woman came to me to ask if I was in trouble- or if I was homeless? I said thank you, but no, I was fine and she said to me that she had been homeless and had needed help from a food bank – and I said I was so pleased to know that now she had her own home and could look after her baby- and I passed on my way deeply touched by her care for a stranger.

The River Lea was no longer a playground neither was there a Nature Reserve or meadows for wild flowers to be seen; instead there were neglected expanses of rough, barren grass and accumulated litter. The tow path was almost deserted for the first time in my walk; but later I saw the tall chimney of the London Waste recycling and disposal plant. The canal boats moored by the river bank were all peoples’ homes and I put Kiwi on the lead because the wooded area by the tow path which he so loved to explore was clearly now a place where the homeless lived.
Then I found John at and he took me for an excellent cup of tea before I reached Tottenham Lock and John, Kiwi and I made our way to Wood Green and our bed for the night.